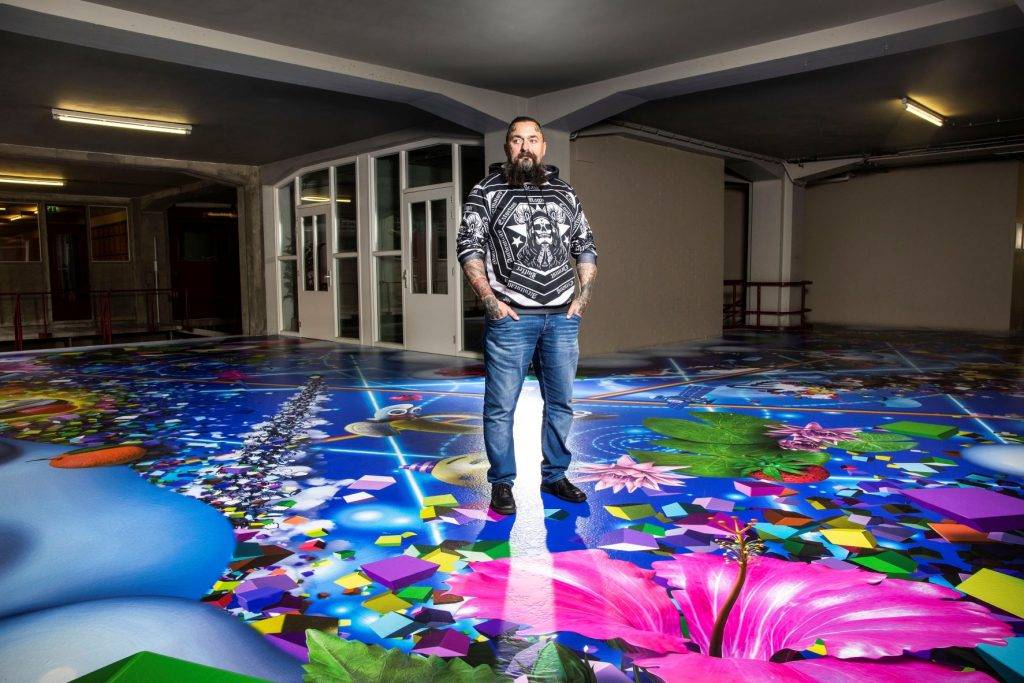 Groot Handelsgebouw has a new artwork by Arno Coenen

Arno Coenen is a local artist known for Horn of Plenty, one of the largest visual works of art in the world inside the Markthal, and recently a special hotelroom in Hotel Not Hotel. He has now turned his creative sights to the Groot Handelsgebouw (GHG), with a spectacular 80,000-pixel digitally rendered floor in the iconic building.

His ‘Trails and Traces’ is the latest in a series of artworks from the Collision Project, in which various artists and visionaries use historic buildings such as GHG as their canvas. Coenen’s Trails and Traces is an inverted version of a classic trompe-l’oeil ceiling. Installed on the floor of GHG’s loading dock, it symbolises people passing by without leaving a visible trace. The work depicts a dynamic collection of satellites, fruit, flowers, emojis, computer icons, rainbow lines, and plane trails.

“Instead of looking at unreachable figures in the sky, I depict what you see from the clouds when you are high up in a plane, including the traces left behind by planes. The loading bay is another such place: every day, countless people are working there without leaving a visible trace. My work symbolises those invisible traces, and thus the human activity that takes place in GHG, the Grand Dame among the Rotterdam icons,” says Coenen.

Arno Coenen creates monumental works of art in the public space, combining digital graphic techniques with traditional techniques to create bold, immersive art experiences. Among his best-known works are the images on the ceilings of the Markthal in Rotterdam and the Beurspassage in Amsterdam.

GHG is more and more becoming a place for art and design. The Collision Project, which started in Industry City, an industrial building complex in Brooklyn, came to GHG in 2020. So far, Rotterdam-based graphic artist Saïd Kinos, letter painter Tim Sake, art collective Beer and Bread and Studio Otherness founder Joel Derksen have created artworks in GHG. Last month, 20 young up-and-coming artists painted 20 ping-pong tables during a live event in the building to underline the role of spontaneous collisions in the creative process.

GHG is owned by Jamestown, the design-focused real estate company that redevelops historic buildings into vibrant community centres. It also co-owns Industry City. Art is central to Jamestown’s philosophy, which advocates an approach that uses the built environment as a canvas for collective creation.

“The built environment requires communal places, where people can share energy and experiment with ideas. As a global initiative, the Collision Project nurtures art as experience and facilitates areas of co-creation,” says Michael Phillips, president of Jamestown.