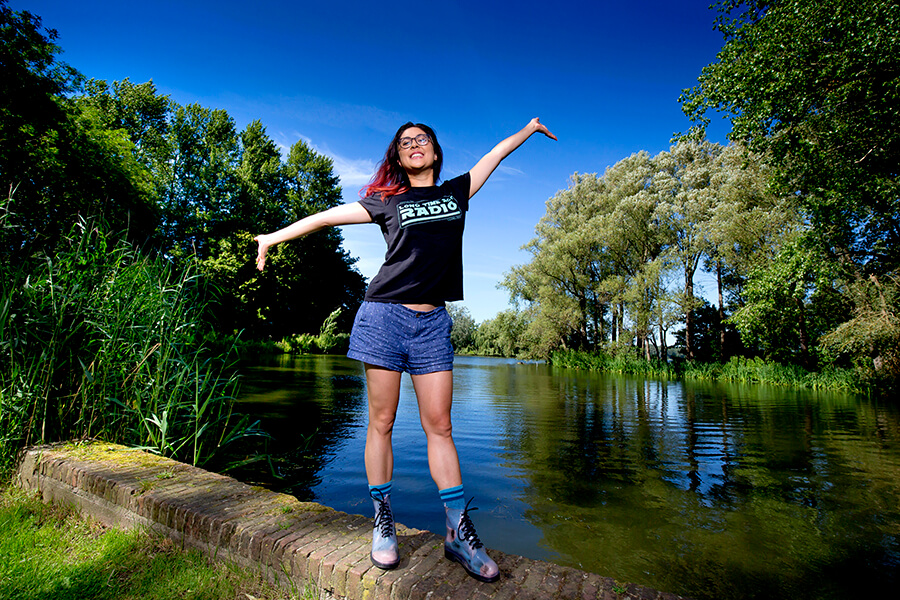 Sterling Schuyler lived in six cities, four countries and three continents before recently settling in Rotterdam. What brought her here? Why is she so enchanted by Holland’s second largest city? And how can an American connect with the Dutch? Sterling Schuyler explains.

Silicon Valley, New York City, Egypt, Atlanta, the U.S. Army Garrison Grafenwoehr in Germany and Rotterdam. When the 31-year-old freelance copywriter and marketing professional Sterling Schuyler recites the places she calls (or used to call) home, she sounds like a 21st-century Marco Polo on heels. Will this impressive list grow even further? Sterling doesn’t think so. “Rotterdam seems to be my final destination, for now. My husband, a former officer in United States Army, studies Economics at Erasmus University and after obtaining his degree, we are planning to stay here. Why? Because we like it here, that’s why!”

When Sterling’s husband Anders decided to exchange his uniform for a book bag in 2018, the choice between an American or a European university wasn’t hard to make. “We don’t have children, and all our stuff was on this side of the pond, so a European university was the obvious choice. Whereas Dutch universities offer programs in English, the Netherlands topped our list of possible destinations. Furthermore, there is something here called the Dutch-American Friendship Treaty, which enables self-employed US citizens to apply for a Dutch residence permit to live and work in the Netherlands. Being a freelance copywriter, this gave me the opportunity to set up my own business fairly easy. Although most of my customers are still American, I am slowly but gradually expanding my Dutch customer base as well. I’ve noticed that there is a pretty big demand for native speakers, when it comes to writing English articles, blog posts or web content, so that works out pretty well for me.”

“When we decided to move to the Netherlands, we initially wanted to live in Amsterdam, but that changed when we visited Rotterdam. We noticed that this city was less crowded, felt more livable and its people seemed to have a more welcoming attitude towards expats. It kind of reminded me of Atlanta where I, unlike New York City, felt more included in the city’s social fabric. When you’re outside, you encounter people you actually know, which creates a sense of community that I really appreciate. Compared to the other places where I’ve lived, I’d rate Rotterdam the highest. I feel safe, and the diversity of its people translates into a great variety of restaurants; yes, I love eating! Another aspect of Rotterdam that really appeals to me is that it is still growing, changing and evolving into the city it wants to be. It has high ambitions, and that makes it a dynamic and vibrant place to live.”

The Schuylers planted their flag in Kralingen, an elegant neighbourhood on the northeastern side of the city, close to Rotterdam’s biggest recreational park: ‘het Kralingse Bos’.

The park, which encircles the city lake ‘de Kralingse Plas, is Sterling’s favourite spot in town. “I distinctly remember the first time we visited the park; it was a beautiful, hot summer day. We were just sitting there, enjoying the view of the lake and I thought to myself ‘this is where I want to be.’ So I am glad we found a place in Kralingen, which literally lies around the corner.”

When Americans think of the Netherlands, they first and foremost think of Amsterdam. The Dutch capital, with its elaborate system of canals, its stunning 17th-century architecture and its many museums, is understandably the go-to destination for any American tourist visiting the Netherlands. Sterling understands her fellow countrymen’s preference for Amsterdam, but she strongly advises them to also include Rotterdam on their itineraries. “Yes, Amsterdam is gorgeous, but the enormous amount of tourist attractions forces visitors to spend all their time doing things and visiting places, and that prevents them from really getting to know the Netherlands. Rotterdam is a bit more laid-back, but there are plenty of quintessential Dutch things to see and do, like eating stroopwafels and poffertjes, taking a ride on the water, or, if you’re into that, visiting a coffee shop. And because you’re not running around all day, there is more time to get to know the Dutch. That being said, mingling with the Dutch demands a little patience. I tend to use this metaphor: Americans are peaches; soft on the outside, but with a rock-solid core. They are generally very approachable, generous and super friendly, but when you get too personal, you will hit a rock solid core. The Dutch, on the other hand, are walnuts; hard on the outside, but soft on the inside. It takes some effort to really connect with them, but once a connection has been established, they are really friendly and open-minded people. You just have to crack that nut!

Favourite restaurant: Ayla on Kruisplein. Everything on the menu is worth trying, and everyone I take there loves it, too. I can never go for just one bit or just one drink. I want to enjoy it all.

What is your favourite area to go shopping?
I love going to the Rotterdamse Oogst in Noord on Saturdays. I like the sense of community that develops around going to the market every week.

What is your favourite neighborhood?
Kralingen, the neighbourhood were my husband and I really fell in love with Rotterdam, but I know there is still so much more to explore.