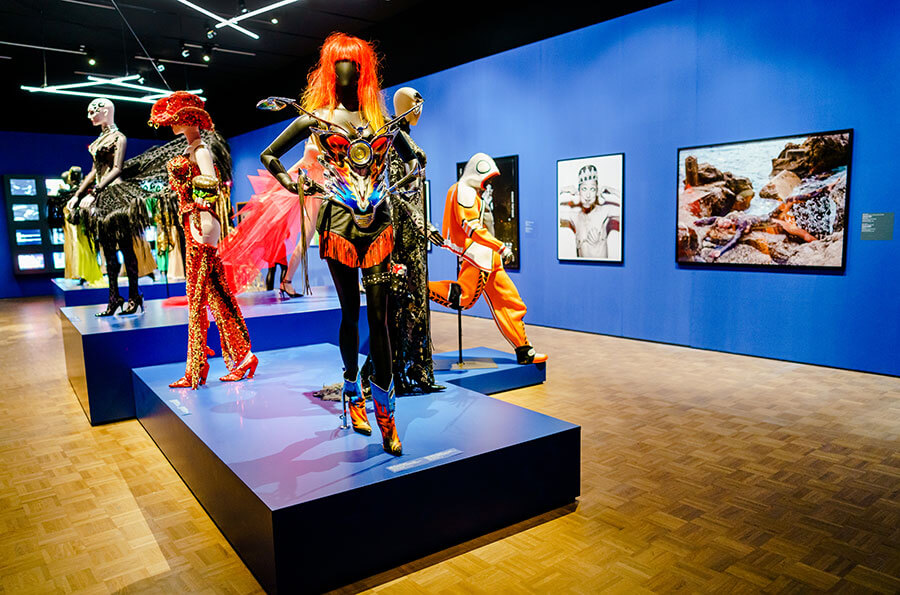 Thierry Mugler at the Kunsthal

Underground techno beats sync to pulsing, white strobes, illuminating the runway like lightning. Through the flashes of light, a gang of supermodels – defined by their slim, corseted waists and stiletto heels – march towards the unsuspecting audience. Their silhouettes cast shadows on the floor behind them, reminiscent of the shadows cast by our favourite superheroes from our youthful comic book days.

The show marked the 20th anniversary of the preeminent Thierry Mugler, a French designer, photographer, perfumer, director and fashion icon. Mugler is credited with dramatically altering fashion and haute couture in the 80s and 90s and redefining femininity with his futuristic avant-garde designs.

This autumn, fantasy and fashion collide at the Kunsthal, where “Thierry Mugler: Couturissime” will be exhibited. This extraordinary showcase boasts more than 150 Mugler designs created between 1977 and 2014, many of which are being displayed for the first time. The exhibit will also feature accessories and stage costumes, clips and videos, archival documents and original sketches. Visitors can immerse themselves in the fashion-forward fantasy world of Thierry Mugler under Swarovski crystal chandeliers. Works by contemporary fashion photographers such as Richard Avedon, Guy Bourdin, Jean-Paul Goude, David LaChapelle, Helmut Newton, Herb Ritts and Dominique Issermann will also be featured in the exhibit. 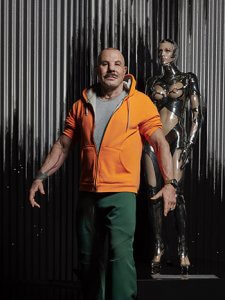 Mugler emerged into the fashion world in the late 1970s. His style combined the feminine hourglass figure with sharp lines and unorthodox materials such as vinyl, LED lights, latex, glass, metal, feathers and faux fur. Inspired by the comic books he read as a boy, Mugler wanted to create the image of powerful, strong women. Wide, fierce shoulder lines juxtapose the hourglass figure to embody a woman of super heroine proportions. The use of masculine materials, such as car parts and metals, also enhance the idea that women are tough and substantive.

Science fiction, futurism and metamorphosis are also common themes in Mugler’s designs. He created an entire collection inspired by insects, which will be on display at the Kunsthal. Even more notable, he created one chrome and glass design that gives, what can only be described as, a fembot-ic appearance.

Mugler’s brand enjoyed a dreamy adolescence. Supermodel legends such as Cindy Crawford, Jerry Hall, Naomi Campbell and Linda Evangelista graced the Mugler runway in the 80s and 90s. Outside of the fashion realm, Mugler directed and designed costumes for George Michael’s “Too Funky” music video, where a young Tyra Banks can be seen sporting a lime green Mugler original.

The company took a turn for the worse in 2003 and shut down after serious financial losses. Mugler went on a hiatus from the fashion world; however, his designs deeply influenced society and popular culture, where he worked with some of the biggest names in the music industry. Mugler worked closely with Beyonce in 2008, designing the costumes for her “I Am…” world tour. In 2010, he designed Lady Gaga’s black-and-white costume for the music video “Telephone.” Outside of the stage and screen, pop icons such as Cardi B and Kim Kardashian continue to don vintage Mugler outfits.

“Thierry Mugler: Couturissime” is the first significant showcase of his work since his brand closed in 2003.

The Thierry Mugler of the 80s and 90s may be gone, but his fantastical style continues to reimagine fashion and redefine femininity today. Initially, Mugler turned down offers to showcase his creations. However, he is now open to sharing his work, stating: “There is no future without a past, so I hope this exhibition will open up a new and inspiring creative future for the audience.”