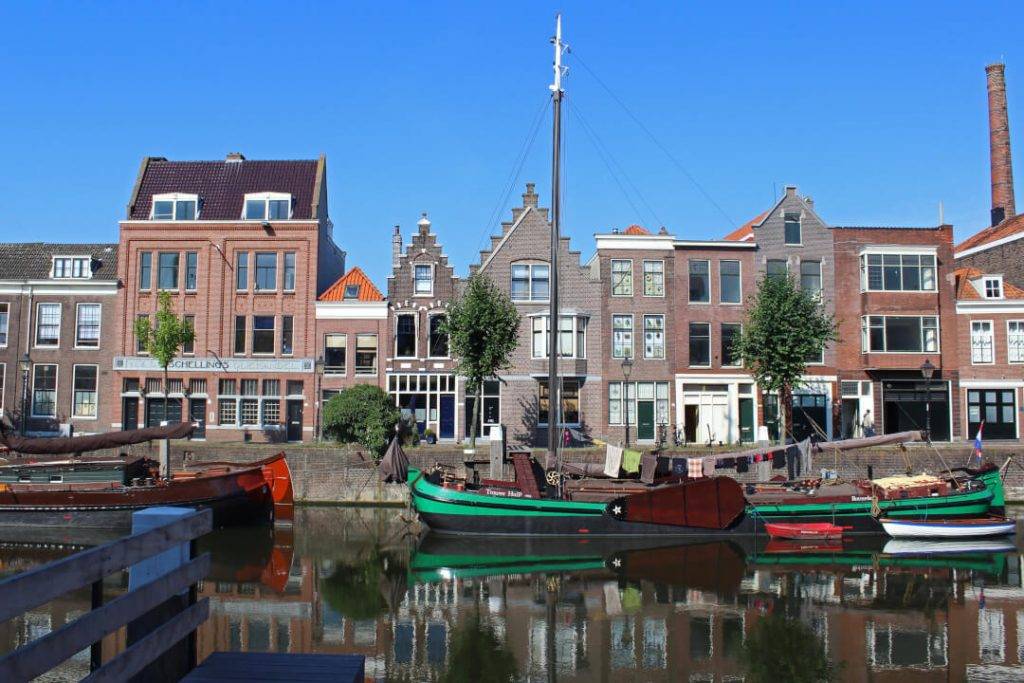 Rotterdam is without question a hyper-modern, hip and happening city, but don’t forget to take in its history as well. In Delfshaven you get a real sense of how things were way back in the day when the Pilgrim Fathers sailed off to the New World. Here, it is all about sailors, breweries and malt mills.

Historic Delfshaven is a small village within our big city. It dates back to 1389, giving it the distinction of being the oldest part of the city standing today. To get there from the city centre, cross the Lage Erf Bridge at the end of the Nieuwe Binnenweg, turn left at Café De Ooievaar (located in an old distillery building) and bam! You are suddenly transported back 600 years to a scene of old cobblestones, quay walls and stepped gables. Once you have passed beyond the Havenstraat, the architectural tours de force of the new metropolis seem a million miles away.

The now stilled harbour enclave actually once belonged to Delft. The nearby city was on the hunt for its own harbour and saw its chance here at its neighbour’s border. The traders and fishermen were welcomed at Voorhaven with open arms.

One of Delfshaven’s most famous entities is Piet Hein, the man who brought glory to old Holland with his sea conquests, like the thrashing of 1628 when he captured the sizable treasure carried by a Spanish fleet of 16 ships near Cuba. His birthplace at 6 Piet Heynstraat, a tiny little street between the Voorhaven and Achterhaven, did not stand the test of time, but on the reconstructed gable, the name of the privateer and merchant proudly lives on.

Opposite, at the rear of an enclosed garden that is maintained daily by its 87-year-old caretaker (feel free to grill him on anything about area), you will see the silhouette of the 600-year-old Pilgrim Fathers’ Church. The Pilgrim Fathers said their last prayers here before sailing off almost 400 years ago to the New World. (The church was subsequently named The Pilgrim Fathers’ Church in acknowledgement of their journey.) These pilgrims are recognised as the founding fathers of America. The church is open to the public on Friday and Saturday afternoons (entry is free). Inside, you will find a replica of the sailing ship Speedwell, on which the company began its adventurous sea journey, as well as some old drawings. Nearly everything inside the Dutch Reformed Church focuses on that memorable year of 1620. Take note of the glass-and-lead windows while you are there.

Speaking of which, on the very same Voorhaven there is an authentic glass-and-lead atelier still operating, located in an old building dating back to 1579. Right next door, there’s an old brewery called The Pilgrim, now a popular restaurant with a lovely courtyard garden.

Then there’s the historic Zakkendragers House on Aelbrechtskolk, one of Delfhaven’s oldest buildings where, very many years ago, prisoners once begged for bread and water. The picturesque street is named for Earl Aelbrechtskolk, who laid the foundations for Delfshaven in the 14th century.  It was he who provided the charter to dig a canal at this location – the water that started it all.

Water, old locks, bridges; it isn’t that hard to imagine how the harbour would have once buzzed with activity, with herring-filled nets being pulled in, the aromas of spices imported from the East filling the air and, later on, the scent of jenever being brewed.  The boom in the drinks industry was the reason why a malt mill was built here in 1727, one of the most prominent monuments on Voorhaven.

Sitting on the terrace of Café De Oude Sluis, it’s easy to conjure up all those men walking around, lugging heavy sacks on their backs.

If you happen to be in town in August, you might enjoy the food festival Ketels aan de Kade, which takes place in historic Delfshaven on the 13th and 14th. You’ll find a food court, a market selling regional produce, and lots of old games as entertainment.