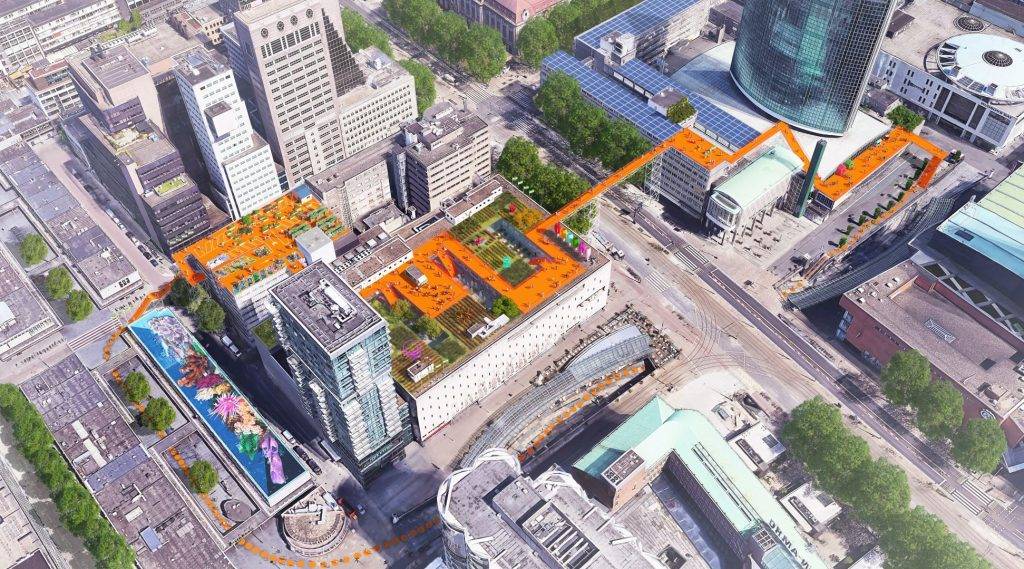 Rotterdam Rooftop Walk lets you see the center from above

MVRDV and Rotterdam Rooftop will erect spectacular air bridges between inner-city rooftops. From 26 May to 24 June 2022 Rotterdam Rooftop Walk will offer exciting sights and visitors can experience how rooftops can contribute to a better future for cities.

An air bridge from the roof of De Bijenkorf to WTC will be the highlight of the route. The temporary installation gives the public access to several roofs that normally remain closed.

The route of the Rotterdam Rooftop Walk begins alongside the Koopgoot, the sunken shopping street that crosses underneath the Coolsingel. Staircases lead visitors up through a series of terraces to the rooftop of the WTC plinth. Then over the Coolsingel to the roof of the Bijenkorf. Here visitors will find the educational displays and demonstrations. They will be three open patios on the top of the building designed by Marcel Breuer in 1957. Finally, the route leads across to the roof of the Bijenkorf parking garage, from where a staircase will take visitors back to ground level. Combined with the Lijnbaan and Koopgoot, the route forms a loop, marked in bright orange to entice people upwards.

The route has a symbolic charge: the manifestation is intended to make people more aware of the potential of roofs and the need to make better use of them. MVRDV and Rotterdam Rooftop Days aim to stimulate the use of these roofs and show how roofs can contribute to a healthy, lively, and attractive city. Roofs can produce energy and food, store water, and allow people to escape the hustle and bustle of the city for a while.

Rotterdam has been looking upwards with its architecture for years. From the Euromast that was built in 1960, to cable cars and observation towers for events. Elevation plays an important role in the city. Being largely rebuilt after WWII, the centre of Rotterdam has vast areas of flat rooftops. However, these roofs are unexplored territory, rarely used by people and often barely furnished.

Earlier this year, MVRDV, Rotterdam Rooftop Days, and the Municipality of Rotterdam published a rooftop catalogue. With more than 130 ideas for making better use of roofs, from fitness parks to cemeteries. The Rotterdam Rooftop Walk goes a step further, giving companies and non-profit organisations the opportunity to show innovations related to greening, energy generation, and water storage. It shows how a roof can be transformed into an attractive public space such as a terrace or a park.

Rotterdam Rooftop Walk builds on a tradition of large crowd-pleasers at height. One of these is the Stairs to Kriterion. A temporary staircase leading to the roof of the Groothandelsgebouw that MVRDV realised in 2016. Designed in the context of Rotterdam’s celebration of 75 years of reconstruction since WWII. The Stairs to Kriterion attracted more than 365,000 visitors.

“After the Stairs, we wanted a follow-up with stairs and bridges so that a larger collection of rooftops is accessible, making it possible to imagine a second layer, a superstructure in the city above the rooftops,” says MVRDV founding partner Winy Maas. “In fact, we already intended to do it during the Eurovision Song Contest, and then celebrate the winners in an opera-like arrangement. That plan couldn’t go ahead because of the coronavirus, but luckily it can happen now! I think it’s great that this project will be realised, thanks to Rotterdam Rooftop Days and the city.”