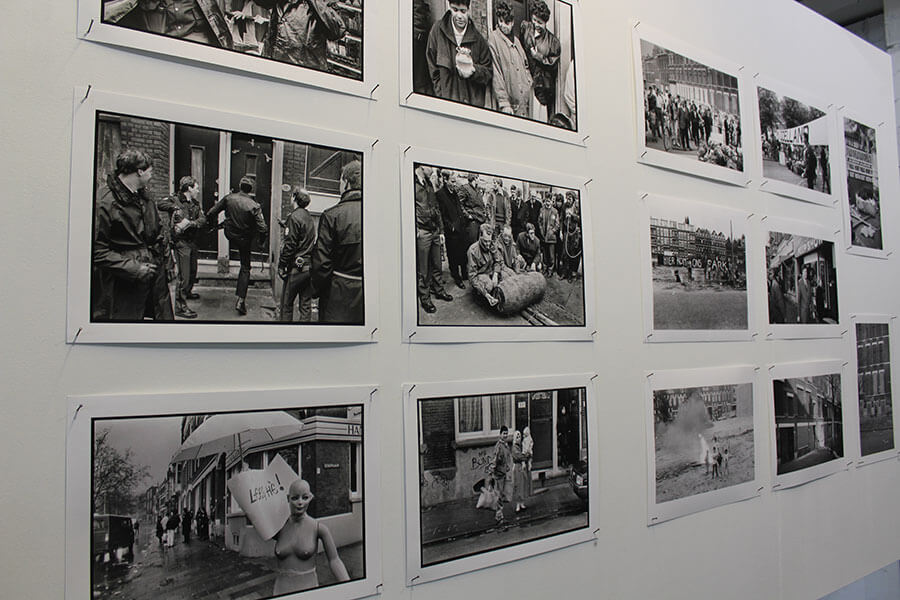 ‘Middelland Foto’, a neighborhood captured through the lens

A photo exhibition of a vibrant neighbourhood’s recent past

Walking through the Middelland these days, you probably wouldn’t guess at its once turbulent past. Couples can be seen strolling down the avenues, students sip home-blend coffees in bright cafes and people from different cultures catch up on its many open squares. Not that long ago however, this was a rough neighbourhood for those who call it home. A new photo exhibition looks back on those days, showcasing the Middelland’s history, offering lessons from its rejuvenation and an eye opening peek that will leave you surprised and intrigued by this vibrant neighbourhood.

On Middelland street, next to the Dirk supermarket, you’ll find the community centre De Hoed, a former hat and cap factory that now houses ateliers for creative and social entrepreneurs. On the first floor, to the left, you’ll find the photo exhibition ‘Middelland Foto’, in a spacious, yet intimate room. Perhaps it’s the absence of the kind of sacred silence normally observed in museums that gives you a sense you’re entering a place of community. There’s a bar in the middle and people drink coffee at tables around the room, leaving you free to explore the pictures hanging on the walls. Most are black and white, creating unity in the pictures which are scavenged from collections of both private and professional photographers like Jan van der Ploeg and Rob de Jong.

Curator Houssein Bouziane, part of cultural foundation Made By, put the exhibition together with Joke van Bilsen. He grew up in Middelland and wanted to show every facet of the neighbourhood. The pictures portray the not too distant past of Middelland, starting with the arrival of working immigrants in the sixties, the tumultuous eighties and nineties, family life, shopping streets, its relatively recent restoration and the arrival of new inhabitants. There are images of boarded-up houses, smashed car windows and kids holding up the needles they’ve found on the street, but also women chatting in front of the supermarket and the neighbourhood coming together during the demonstrations against prostitution.

It was a bizarre time, Bouziane says when I run into him at the exhibition. “As a kid I didn’t really realise what was going on, but looking back now, I can see how crazy it was. It was exactly as you see it presented here.” He singles out a photo of a junkie sleeping on a bench, “We used to play next to guys like that and we found needles on the streets all the time.” These were the nineties and the heroin epidemic raging across Europe found its way to the Middelland. Back then, Middelland was known to be a very unsafe area, where crime, drugs and poverty were everywhere. The division between classes was poignant and clearly visible in the differences between the streets and the avenues. “Middelland was a place of streets and avenues. The streets were for the very poor, the avenues for the incredibly rich.”

After the community started to clean up the streets, and with the help of the police reclaimed the neighbourhood from the drug abuse and prostitution, things started to change. “Middelland has always been a dynamic place, where people from more than 175 nationalities live side by side,” Bouziane says. “That’s not always easy, but people interact with each other and after a while, start to understand each other. I think that’s very special.” It’s one of the reasons the neighbourhood is now so welcoming to the many new inhabitants, shops and cafés. As a visitor to the community centre, it feels special to bear witness to the subject of the exhibition; to be able to directly interact with it. When you step outside, you can almost see the people who once walked these streets and all the things that went on in them.

From June, you can sign up for a free tour to see the places featured in the exhibition. If you would like to join, send an e-mail or visit the website www.middlandfoto.nl.

Several Rotterdam photographers like Otto Snoek, Carel van Hees and Jan van der Ploeg contributed to the exhibition, combined with pictures from residents and the city archive. Visit www.middlandfoto.nl for an overview of all the photographers.