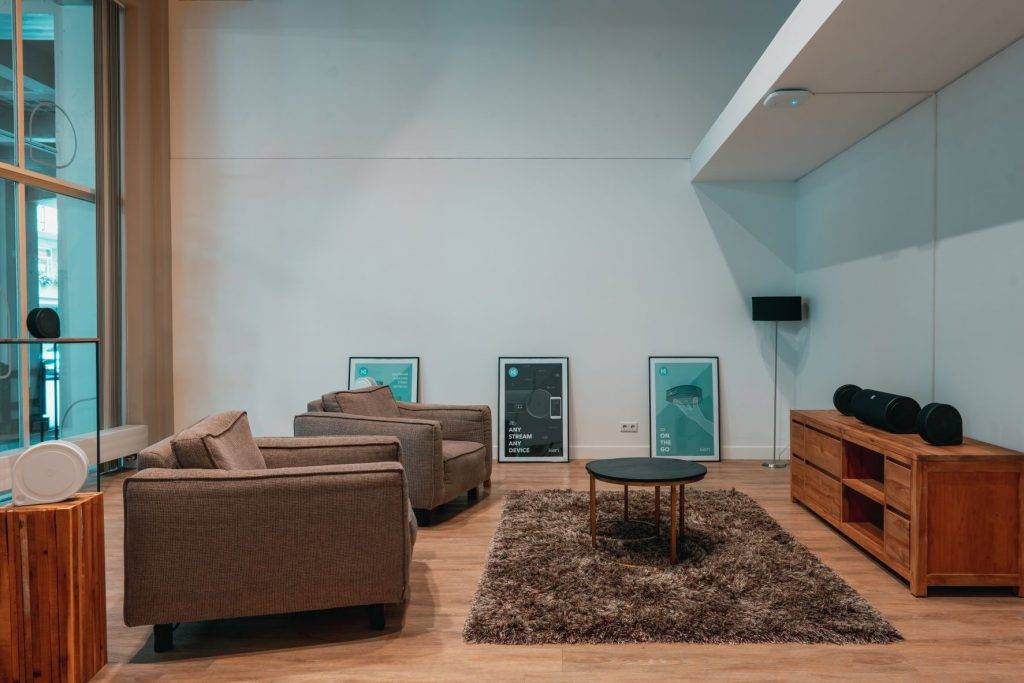 kien is obsessed with good sound

Frenchman Florent and Dutch Jorn met at Bang & Olufsen. That’s where the idea of ​​designing their own audio system was born. They imagined the beauty and simplicity of multiple portable speakers that could combine to form any other home system. They found an office in Groot Handelsgebouw and have now opened kien Sound Studio .

The dynamic duo of kien has only one goal: ”Our goal is to democratize hi-fi audio. By offering high-quality products that look and sound great, are yet affordable, and are easy to use. The new standard in audio and design.”

They now offer a quality audio system with the freedom of portability that looks different enough to turn heads. They want to create a social listening experience, so coming together with friends means pairing up for a bigger sound. The sound system is smart enough to morph from portable speaker to party-pairing to surround sound to bathroom accessory.

Thanks to the wireless connection between the Subwoofer and Satellite speakers, you can enjoy pure and clear high-resolution sound in freedom.

In the kien Sound Studio in Rotterdam clients can have an extensive listening experience of the system. The set-up looks like a living room. Specialists are present in the studio to answer questions. The kien Sound Studio is open every weekday from 12 to 3 PM. You can just walk in to watch and listen without any obligation. It’s also possible to schedule an appointment.

The Groot Handelsgebouw, next to Rotterdam Central Station, is the largest multi-tenant business building in The Netherlands. The monument is a city within a city. Imposing from the outside, inside it is a building with an open character. It’s home to several eateries like Vinn, Altijd in de buurt, Lebkov and Ellis Gourmet Burger and shops like Amac and Zwaan Bikes. Soon there will be a Foodhall at GHG in the former Bar Brasserie Engels.

The Groot Handelsgebouw is also home to CIC. The Cambridge Innovation Center opened its first international expansion in 2016 in Rotterdam. CIC provides flexible office-, coworking-, and event space and amenities for innovative companies and entrepreneurs.

At the time CIC Founder and CEO Tim Rowe said: ”We chose Rotterdam after careful consideration of the best location for our first center outside of the US. The Dutch have one of the most entrepreneurial cultures in Europe, and we believe there is incredible potential in Rotterdam. Rotterdam is a future­oriented, design­centric city that is increasingly being recognized on the world stage. It benefits from some of the strongest universities in the region, is a major maritime and rail hub, and, most importantly, its people have a powerful work ethic similar to that in our hometown of Boston. We think this is going to be a great partnership.”

They have now announced that CIC Rotterdam is expanding! There will be a new neighborhood with larger offices and public spaces. The goal is to open the new space in January 2022.

Furthermore, next to the impressive Groot Handeslgebouw a new hotel will be opened soon. Hotel Not Hotel already has a location in Amsterdam. The concept is that a room isn’t just a room, but a work of art with its own creator, story, and identity. Most of them are designed and specially made by Collaboration-O, a group of young designers that originated from the Eindhoven Design Academy, and one by the Rotterdam artist Arno Coenen.

He also made a new creation to sleep in for the new location. In a large communal space, guests will find 36 objects which serve as rooms, and later that will be expanded to 52 rooms. Jesús Malverde, a Mexican restaurant and a cocktail bar, is also part of the experience.