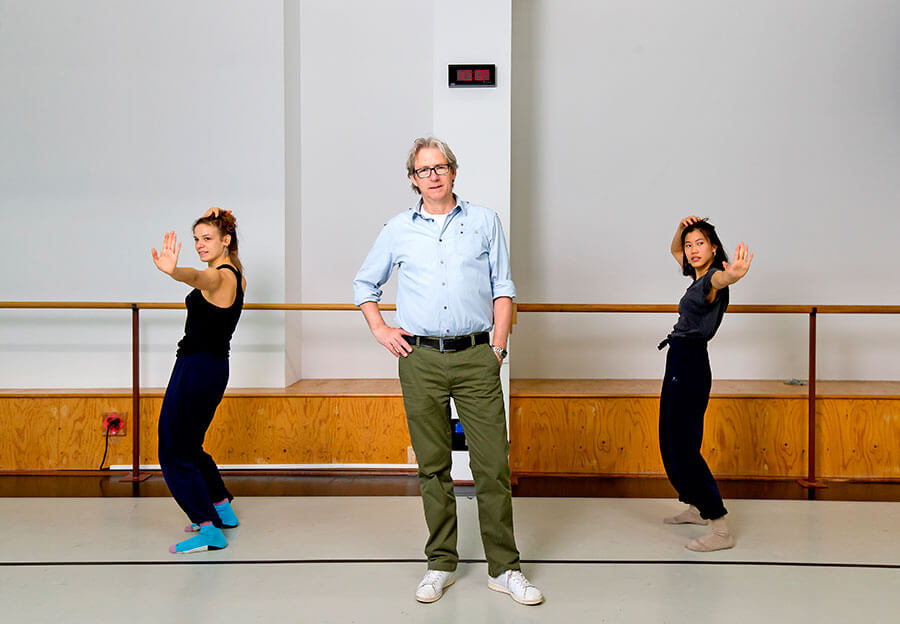 Celebrating its 75th anniversary next year, Scapino Ballet is the oldest dance company in the Netherlands. Oldest yes, but by no means staid: constant self-renewal is at its very core. Ed Wubbe (1957) has been its artistic leader since 1992 and is known locally and beyond for his work that exceeds genres. According to Wubbe, there are many parallels between Scapino and Rotterdam: “We’re ambitious and dynamic, just like this city.”

Replacing the brick building built after World War II, Rotterdam got a brand new municipal theatre back in 1988. This modern theatre merited its own contemporary dance company and a match was found in Scapino: in 1994, they moved from Amsterdam to Rotterdam. Now, Scapino is firmly rooted in Rotterdam. “The centre is our stomping ground, so we always feel the pulse of the city. It’s where we rehearse, perform and collaborate with many institutions in the city. We’ve built a loyal audience here, but that doesn’t mean we don’t want to become even better known. We want all Rotterdammers to come to our shows. And internationally too, of course, we are constantly expanding our boundaries” says Wubbe.

The company is going to celebrate its anniversary abundantly. “We’ve planned a large production in the new Luxor Theatre, followed by a national tour. We’ll again be working with circus artists as we did with TING! (2016). Whether it be acrobats or musicians, I always like to collaborate with artists from other disciplines to produce exciting, adventurous shows that are communicative at the same time.”

As house choreographer, Ed Wubbe has drawn many accolades for full-length works as Kathleen (1992 & 2011), Nico (1997 and 2014), Pearl (2011), Pas de Deux (2016 & 2019) and TING! (2016 & 2018). These, and other Scapino productions, are known to be quite accessible to wide audiences. “Contemporary dance has the reputation of being elitist or complicated, but I don’t think it is. At least, not the type of dance we want to create. I want someone who doesn’t know anything about dance to come to a show and have a great evening. We try to achieve that by letting the show revolve around a clear concept or theme. Without simplifying it, however, we don’t need to tell a story. Dance is associative, not narrative. When you’re in front of an abstract painting, taking in the colours and composition, it does something to you. You find inspiration in it, or a connection. That’s what we strive to do, too. It’s also why we employ dancers of all ages, so that audiences can connect with them. Bonnie Doets, one of our star dancers, is in her forties and has been with us since 1993. She’s recognised all the time. It’s not just football players who are ‘of’ the city!”

With young guest and resident choreographers Wubbe has taken on a mentoring role as well. “There’s always the tendency that music and theatre audiences age, but young choreographers attract younger crowds. We’ve always scouted, stimulated and guided new talent. They come from diverse backgrounds and bring in new impulses. We want to discover them before their work has been shown elsewhere, because it helps us create a distinctive repertoire. Another mission of Scapino is to go to schools and neighbourhood centres to show people what we do. Almost everyone can dance and can identify with it – they just need to be seduced to come to one of our productions.”

A stage for Rotterdam

One of the things Scapino hopes to realise during their anniversary year is a “glass house of dance”. “It would be our gift to the city: A real glass house, where we would invite every dancing Rotterdammers to come and dance. From professional companies to Codarts, but also Turkish or Hindustani dance associations, hiphop, tango or capoeira groups, even genres we aren’t familiar with yet. There are so many people who enjoy dancing in their free time; did you know research has shown that 16% of Dutch people dance? That’s quite a lot! We’d like to give everyone a stage to rehearse and perform, while passers-by can stop, watch and enjoy everything that’s going on, twenty-four seven.”

Although its realisation is still in the early stages, the idea of a completely transparent house already makes Wubbe’s heart race. “We’d do something that’s never been done before. We’re living so close together in this city, yet we don’t know each other very well. Dance is the ideal way to meet each other in a positive way and maybe understand each other a little better. Dance connects us all.”