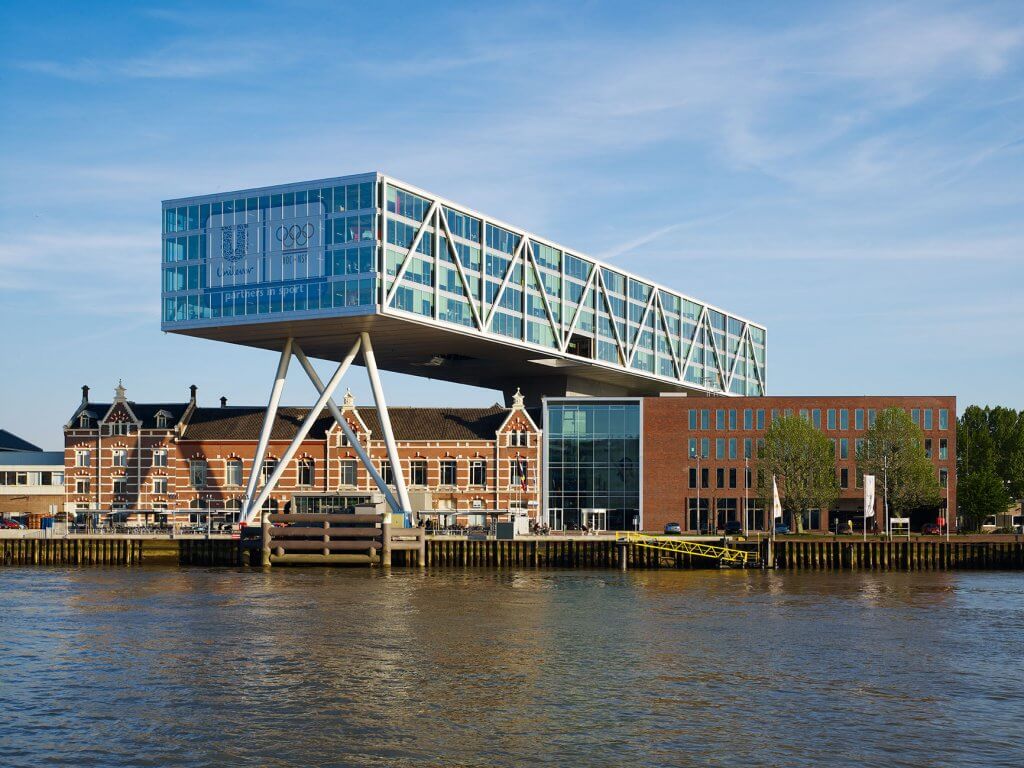 A family of bridges

“Floating” impressively above a 19th-century margarine factory, De Brug (‘The Bridge’), has been the head office of Unilever Netherlands since 2008. Its construction at the time was a spectacle, but the final result is no less striking: a massive horizontal statement seen in its full splendour from the opposite side of the Nieuwe Maas river. Representing the firm responsible for the design, architect Chris de Jonge explains why this building could only have worked in Rotterdam.

The initial assignment was to position the office next to the factory complex within a new residential area, but your team decided otherwise…

“Construction developer Dura Vermeer invited us to team up with other architects and advisors on the construction bid. Together with the urban planning agency West 8, we decided it would work better to develop the stacked housing separately and build the office on top of the factory complex. With the Erasmus bridge and the historical bridge ‘De Hef’, it would then form ‘a family of bridges’. It was an ambitious plan, of which Dura Vermeer’s president of the board had said: ‘Either we win, or we’ll be excluded immediately’. We did win, but then had to change the initial design quite a bit: the building needed to be expanded from 10.000 to 15.000 square metres, going from 3 to 4 floors. We also had to create an adjacent entrance and parking garage.”

On YouTube, you can still find videos of the building’s construction. On an adjacent empty lot, the steel framework was assembled 25 metres above ground-level and then slowly wheeled over the existing factory, where production continued 24/7 in the meantime. Quite a challenge…

“We first thought of transporting the entire steel construction with a floating sheerleg, but this proved to be too tricky. Then we came up with another ‘plug and play’ solution: the steel framework was made and assembled by Hollandia Structures and then Mammoet rolled it to and over the old factory, where it was secured. A tour de force.”

“It was an industrial project, but the location suited this purpose perfectly. During the design process we had already thought: if such a robust-looking building were to work anywhere, it would be in Rotterdam. It fits the city’s culture and reflects the harbour with its cranes, railways and heavy industry. Quite different to the type of flashy, shiny office towers that you’ll find in Amsterdam, for example. The building’s interior is also industrial and open, with lots of exposed steel, mezzanines of all sizes and huge windows. This matches Unilever’s open company culture and was an important factor in the initial assignment.”

Did you know at the time it would become an icon of Rotterdam architecture?

“We’ve always realised it would be an important part of the skyline – in a horizontal sense even. Seen from the Maas Boulevard, De Brug has a particularly strong presence. That’s why we set the bar high for every detail, from the colour of the steel to the glass we used, so that the whole picture would be absolutely right. Everyone who’s worked on the project is still very proud of the building.”

How does De Brug fit within the style of the firm?

“We’re often asked to design functional buildings, from laboratories to schools to parking garages and there are usually technical challenges involved. These challenges can be the result of working in sensitive locations, because of the existing historic buildings for instance. In such cases we decide to build underground or go upwards, like we did here. In Rotterdam there’s more freedom in design compared with other cities, but even for De Brug, we had to factor in that the 19th-century factory was part of a protected cityscape. The challenge is always to find a good dialogue with existing buildings: we want to add to them or fit in, in a way that makes sense.”

“I think, considering cities are becoming more densely populated, building upwards or below ground level is the future. We’re increasingly seeing the value of what has already been built and building in a more durable way, resulting in fewer plots to build on. Thankfully though, we also don’t want unrestricted urban sprawl. So, the only solution to our space needs is space intensification, whether it’s underground parking or a high rise. It will make architecture increasingly complex, as partners will be dependent on each other’s technical expertise, but also much more interesting.”