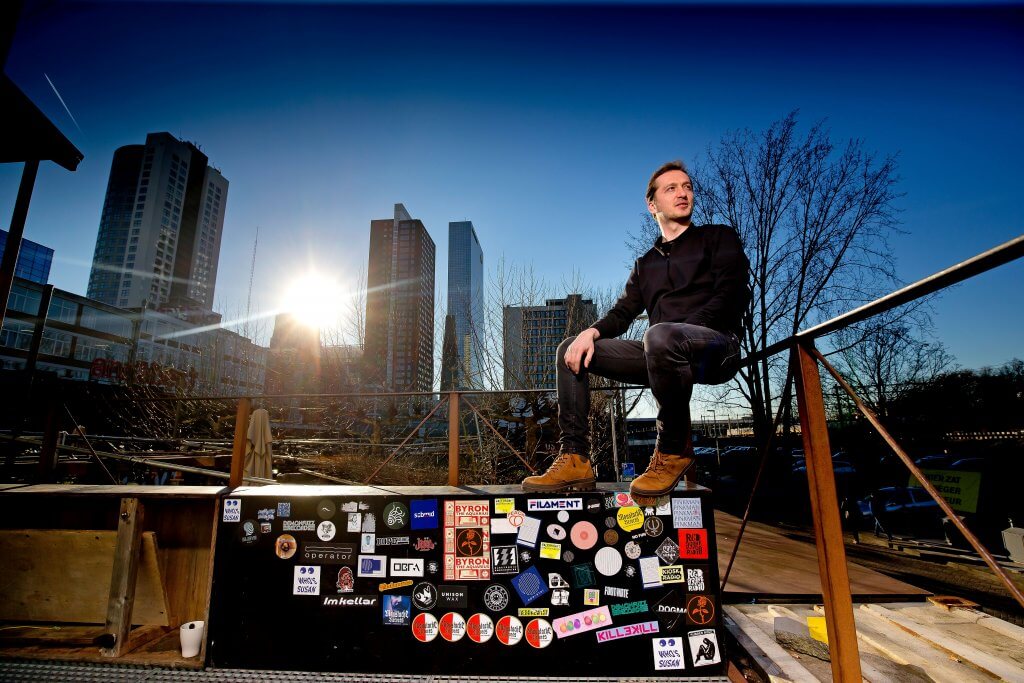 Home from Home: The Architect DJ

In this series, Inside Rotterdam talks to expats, international students and fresh arrivals about why they’ve chosen to make Rotterdam their new home.

Ovidiu Stanciu loves to wander through the southern part of Rotterdam. The remnants of the city’s old dockyards, with their robust, industrial buildings, are candy to an architect’s eye, he explains. “When I talk to recently arrived expats, I encourage them to explore this part of the city. It has a certain authenticity to it. The Maassilo, for instance; a former grain elevator turned nightclub in the middle of a diverse, multicultural part of town. It is a quintessential symbol of Rotterdam’s nightlife and the city’s ability to reinvent itself. I Love it.”

Bacău, Bucharest, Delft, Rotterdam
Ovidiu grew up in the Romanian city of Bacău, at the foothills of the Carpathian Mountains. After studying in Bucharest, a scholarship gave him the opportunity to continue his studies abroad. The UK was his first preference, but affordable tuition fees and the well-known English proficiency of the Dutch, led him to the decision that a university in the Netherlands was a better choice. His first stop was Delft, where he obtained his degree in architecture at the Technical University. In 2013, he moved to Rotterdam and found a job as an architectural visualizer. But better job opportunities weren’t the only reason why Ovidiu relocated to Europe’s largest port city. “When I was studying in Delft, I was already spending my weekends in Rotterdam. Mainly because of the bustling nightlife over here. Don’t get me wrong, I love Delft, but when it comes to culture, Rotterdam has far more to offer. The city was, and still is, a breeding ground for creative minds and that really appeals to me.”

Diversity
As an expat, the newlywed architect enjoys living in a multicultural melting pot where over 170 nationalities coexist: “Coming from a place where everybody looks the same and worships the same God, Rotterdam’s diversity was new to me. A street like West-Kruiskade for example, houses communities from all corners of the world; Japanese, Chinese, Arab, Cape Verdean and so on. The fact that so many of the city’s inhabitants have roots elsewhere made it a lot easier to fit in.”

Architect DJ
While working as an architectural visualizer, Ovidiu laid the groundwork for an alternative career. “Due to the nature of my job, I was able to listen to a lot of music while I was working. I analysed tracks, recognised patterns and figured out how composers use different musical building blocks to create a track. I noticed there are many similarities between designing physical structures and music and it wasn’t long before I bought my own turn tables and started to produce music myself. Since then, I have been DJing at bars and house parties and recently released my first tracks on vinyl.”

Operator Radio
When asked which part of the city he loves most, Ovidiu doesn’t have to think too long. “The area around Schieblock, near Centraal Station, tops my list. It’s another telling example of Rotterdam’s ability to constantly reinvent itself. Not so long ago, the area was a deserted part of town, where not much was going on. That changed when Rotterdam’s creative community started working together to rejuvenate the district. Nowadays, it’s the epicentre of Rotterdam’s nightlife with clubs, bars and, last but not least, Operator Radio; an online radio station where DJ’s like myself host their own shows. It’s located in an old shipping container and provides artists, producers and DJ’s a place to practice and perform. The shows are streamed on the Internet, so people can watch them online. Because so many different groups are participating, you can see and hear a different piece of Rotterdam in every show. It’s quite a special thing.”

“We love it here”
Ovidiu follows in the footsteps of so many other expats who fell in love with the second largest city in the Netherlands. In his case, it wasn’t the only thing he fell in love with. “I met my wife in Rotterdam. She is from Portugal and works as a scientist at the Erasmus University. We recently got married and moved to the westside of town. Will we still be here in ten years from now? I honestly can’t see a reason why we wouldn’t be. We love it here.”